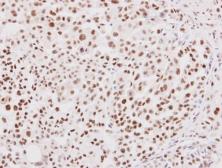 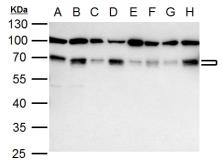 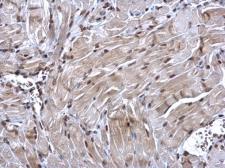 Recombinant protein encompassing a sequence within the center region of human NRF1. The exact sequence is proprietary.

This gene encodes a protein that homodimerizes and functions as a transcription factor which activates the expression of some key metabolic genes regulating cellular growth and nuclear genes required for respiration, heme biosynthesis, and mitochondrial DNA transcription and replication. The protein has also been associated with the regulation of neurite outgrowth. Alternate transcriptional splice variants, which encode the same protein, have been characterized. Additional variants encoding different protein isoforms have been described but they have not been fully characterized. Confusion has occurred in bibliographic databases due to the shared symbol of NRF1 for this gene and for "nuclear factor (erythroid-derived 2)-like 1" which has an official symbol of NFE2L1. [provided by RefSeq]
Show More +