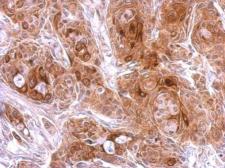 1.7 mg/ml (Please refer to the vial label for the specific concentration.)

Carrier-protein conjugated synthetic peptide encompassing a sequence within the N-terminus region of human OPG. The exact sequence is proprietary.

The protein encoded by this gene is a member of the TNF-receptor superfamily. This protein is an osteoblast-secreted decoy receptor that functions as a negative regulator of bone resorption. This protein specifically binds to its ligand, osteoprotegerin ligand, both of which are key extracellular regulators of osteoclast development. Studies of the mouse counterpart also suggest that this protein and its ligand play a role in lymph-node organogenesis and vascular calcification. Alternatively spliced transcript variants of this gene have been reported, but their full length nature has not been determined. [provided by RefSeq]
Show More +