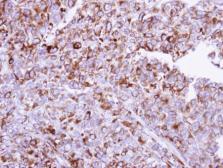 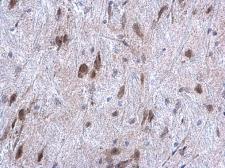 0.41 mg/ml (Please refer to the vial label for the specific concentration.)

Recombinant protein encompassing a sequence within the C-terminus region of human ORP150. The exact sequence is proprietary.

The protein encoded by this gene belongs to the heat shock protein 70 family. This gene uses alternative transcription start sites. A cis-acting segment found in the 5' UTR is involved in stress-dependent induction, resulting in the accumulation of this protein in the endoplasmic reticulum (ER) under hypoxic conditions. The protein encoded by this gene is thought to play an important role in protein folding and secretion in the ER. Since suppression of the protein is associated with accelerated apoptosis, it is also suggested to have an important cytoprotective role in hypoxia-induced cellular perturbation. This protein has been shown to be up-regulated in tumors, especially in breast tumors, and thus it is associated with tumor invasiveness. This gene also has an alternative translation initiation site, resulting in a protein that lacks the N-terminal signal peptide. This signal peptide-lacking protein, which is only 3 amino acids shorter than the mature protein in the ER, is thought to have a housekeeping function in the cytosol. In rat, this protein localizes to both the ER by a carboxy-terminal peptide sequence and to mitochondria by an amino-terminal targeting signal. [provided by RefSeq]
Show More +