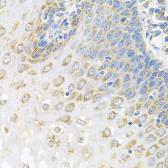 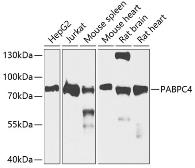 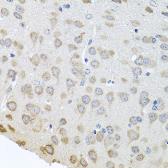 Poly(A)-binding proteins (PABPs) bind to the poly(A) tail present at the 3-prime ends of most eukaryotic mRNAs. PABPC4 or IPABP (inducible PABP) was isolated as an activation-induced T-cell mRNA encoding a protein. Activation of T cells increased PABPC4 mRNA levels in T cells approximately 5-fold. PABPC4 contains 4 RNA-binding domains and proline-rich C terminus. PABPC4 is localized primarily to the cytoplasm. It is suggested that PABPC4 might be necessary for regulation of stability of labile mRNA species in activated T cells. PABPC4 was also identified as an antigen, APP1 (activated-platelet protein-1), expressed on thrombin-activated rabbit platelets. PABPC4 may also be involved in the regulation of protein translation in platelets and megakaryocytes or may participate in the binding or stabilization of polyadenylates in platelet dense granules. Alternatively spliced transcript variants encoding different isoforms have been found for this gene. [provided by RefSeq, Oct 2008]
Show More +

There are currently no references for PABPC4 antibody (GTX33380). Be the first to share your publications with this product.
Submit a Reference

There are currently no reviews for PABPC4 antibody (GTX33380). Be the first to share your experience with this product.
Submit a Review