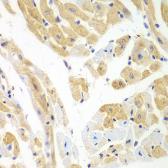 The protein encoded by this gene appears to be multifunctional. Along with PCBP-1 and hnRNPK, it is one of the major cellular poly(rC)-binding proteins. The encoded protein contains three K-homologous (KH) domains which may be involved in RNA binding. Together with PCBP-1, this protein also functions as a translational coactivator of poliovirus RNA via a sequence-specific interaction with stem-loop IV of the IRES, promoting poliovirus RNA replication by binding to its 5'-terminal cloverleaf structure. It has also been implicated in translational control of the 15-lipoxygenase mRNA, human papillomavirus type 16 L2 mRNA, and hepatitis A virus RNA. The encoded protein is also suggested to play a part in formation of a sequence-specific alpha-globin mRNP complex which is associated with alpha-globin mRNA stability. This multiexon structural mRNA is thought to be retrotransposed to generate PCBP-1, an intronless gene with functions similar to that of PCBP2. This gene and PCBP-1 have paralogous genes (PCBP3 and PCBP4) which are thought to have arisen as a result of duplication events of entire genes. This gene also has two processed pseudogenes (PCBP2P1 and PCBP2P2). Multiple transcript variants encoding different isoforms have been found for this gene. [provided by RefSeq, Jan 2018]
Show More +

There are currently no references for PCBP2 antibody (GTX33389). Be the first to share your publications with this product.
Submit a Reference

There are currently no reviews for PCBP2 antibody (GTX33389). Be the first to share your experience with this product.
Submit a Review