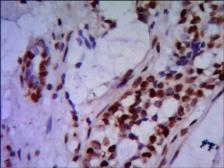 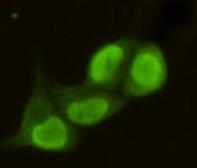 PRMT6 is a protein arginine N-methyltransferase, and catalyzes the sequential transfer of a methyl group from S-adenosyl-L-methionine to the side chain nitrogens of arginine residues within proteins to form methylated arginine derivatives and S-adenosyl-L-homocysteine. Protein arginine methylation is a prevalent post-translational modification in eukaryotic cells that has been implicated in signal transduction, the metabolism of nascent pre-RNA, and the transcriptional activation processes. IPRMT6 is functionally distinct from two previously characterized type I enzymes, PRMT1 and PRMT4. In addition, PRMT6 displays automethylation activity; it is the first PRMT to do so. PRMT6 has been shown to act as a restriction factor for HIV replication.
Show More +

There are currently no references for PRMT6 antibody [2C3-F1-G1] (GTX49197). Be the first to share your publications with this product.
Submit a Reference

There are currently no reviews for PRMT6 antibody [2C3-F1-G1] (GTX49197). Be the first to share your experience with this product.
Submit a Review