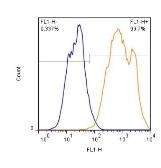 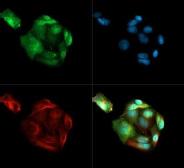 0.97 mg/ml (Please refer to the vial label for the specific concentration.)

A synthetic peptide made to an internal portion of the human Gankyrin protein sequence (between residues 100-200). [UniProt# O75832]

The 26S proteasome is a multicatalytic proteinase complex with a highly ordered structure composed of 2 complexes, a 20S core and a 19S regulator. The 20S core is composed of 4 rings of 28 non-identical subunits; 2 rings are composed of 7 alpha subunits and 2 rings are composed of 7 beta subunits. The 19S regulator is composed of a base, which contains 6 ATPase subunits and 2 non-ATPase subunits, and a lid, which contains up to 10 non-ATPase subunits. Proteasomes are distributed throughout eukaryotic cells at a high concentration and cleave peptides in an ATP/ubiquitin-dependent process in a non-lysosomal pathway. An essential function of a modified proteasome, the immunoproteasome, is the processing of class I MHC peptides. This gene encodes a non-ATPase subunit of the 19S regulator. Two transcripts encoding different isoforms have been described. Pseudogenes have been identified on chromosomes 3 and 20. [provided by RefSeq]
Show More +