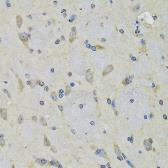 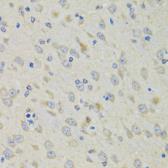 Mutations in the Schizosaccharomyces pombe Rae1 and Saccharomyces cerevisiae Gle2 genes have been shown to result in accumulation of poly(A)-containing mRNA in the nucleus, suggesting that the encoded proteins are involved in RNA export. The protein encoded by this gene is a homolog of yeast Rae1. It contains four WD40 motifs, and has been shown to localize to distinct foci in the nucleoplasm, to the nuclear rim, and to meshwork-like structures throughout the cytoplasm. This gene is thought to be involved in nucleocytoplasmic transport, and in directly or indirectly attaching cytoplasmic mRNPs to the cytoskeleton. Alternatively spliced transcript variants encoding the same protein have been found for this gene. [provided by RefSeq, Jul 2008]
Show More +

There are currently no references for RAE1 antibody (GTX33456). Be the first to share your publications with this product.
Submit a Reference

There are currently no reviews for RAE1 antibody (GTX33456). Be the first to share your experience with this product.
Submit a Review