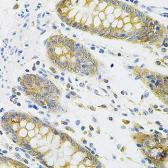 This gene encodes a member of the tumor necrosis factor (TNF) cytokine family which is a ligand for osteoprotegerin and functions as a key factor for osteoclast differentiation and activation. This protein was shown to be a dentritic cell survival factor and is involved in the regulation of T cell-dependent immune response. T cell activation was reported to induce expression of this gene and lead to an increase of osteoclastogenesis and bone loss. This protein was shown to activate antiapoptotic kinase AKT/PKB through a signaling complex involving SRC kinase and tumor necrosis factor receptor-associated factor (TRAF) 6, which indicated this protein may have a role in the regulation of cell apoptosis. Targeted disruption of the related gene in mice led to severe osteopetrosis and a lack of osteoclasts. The deficient mice exhibited defects in early differentiation of T and B lymphocytes, and failed to form lobulo-alveolar mammary structures during pregnancy. Two alternatively spliced transcript variants have been found. [provided by RefSeq, Jul 2008]
Show More +