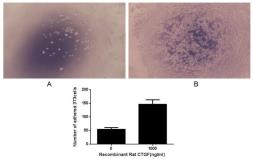 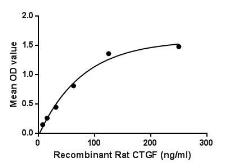 Connective Tissue Growth Factor (CTGF), also known as CCN2 is a matricellular protein of the CCN family of extracellular matrix-associated heparin-binding proteins. CTGF has important roles in many biological processes, including cell adhesion, migration, proliferation, angiogenesis, skeletal development, and tissue wound repair, and is critically involved in fibrotic disease and several forms of cancers. Besides, Actin Beta (ACTb) has been identified as an interactor of CTGF, thus a binding ELISA assay was conducted to detect the interaction of recombinant rat CTGF and recombinant rat ACTb. Briefly, CTGF were diluted serially in PBS, with 0. 01% BSA (pH 7. 4). Duplicate samples of 100 μl were then transferred to ACTb-coated microtiter wells and incubated for 2h at 37ºC. Wells were washed with PBST and incubated for 1h with anti-CTGF pAb, then aspirated and washed 3 times. After incubation with HRP labelled secondary antibody, wells were aspirated and washed 3 times. With the addition of substrate solution, wells were incubated 15-25 minutes at 37ºC. Finally, add 50 μl stop solution to the wells and read at 450nm immediately. The binding activity of of CTGF and ACTb was in a dose dependent manner.
To measure the effect of CTGF on cell adhesion, a general procedure performance as follows: 100 μl PBS containing recombinant CTGF were incubated overnight at 4ºC in 96-well ELISA plates. Wells were blocked with 200μl PBS containing 3% BSA and then incubated for 1h at 37 ºCwith 100 μl PBS containing approximately 5x10⁴ 3T3 cells. Adherent cells were then fixed for 15 min with 5% formaldehyde and non-adherent cells were removed by washing each well three times with PBS. The remaining cells were incubated with 0. 5% cristal violet for 10mins then counted at high magnification (×400) randomly.

growth factor that may be a mediator of TGFbeta1-driven matrix production and normal skeletal remodeling [RGD, Feb 2006]
Show More +

There are currently no references for Rat CTGF protein, His tag (active) (GTX00375-pro). Be the first to share your publications with this product.
Submit a Reference

There are currently no reviews for Rat CTGF protein, His tag (active) (GTX00375-pro). Be the first to share your experience with this product.
Submit a Review