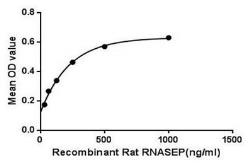 Ribonuclease P is a site specific endonuclease that generates mature tRNAs by catalysing the removal of the 5'-leader sequence from pre-tRNA to produce the mature 5'-terminus. It can also cleave other RNA substrates such as 4.5S RNA. In bacteria, RNase P consists of of two components: a large RNA (about 400 base pairs) encoded by rnpB, and a small protein (119 to 133 amino acids) encoded by rnpA. The RNA moiety of RNase P carries the catalytic activity; the protein component plays an auxiliary, but essential, role in vivo by binding to the 5'-leader sequence and broadening the substrate specificity of the ribozyme. The sequence of rnpA is not highly conserved, however there is, in the central part of the protein, a conserved basic region. Besides, Nucleophosmin (NPM) has been identified as an interactor of RNASEP, thus a binding ELISA assay was conducted to detect the interaction of recombinant rat RNASEP and recombinant rat NPM. Briefly, RNASEP were diluted serially in PBS, with 0.01% BSA (pH 7.4). Duplicate samples of 100 μl were then transferred to NPM-coated microtiter wells and incubated for 2h at 37ºC. Wells were washed with PBST and incubated for 1h with anti-RNASEP pAb, then aspirated and washed 3 times. After incubation with HRP labelled secondary antibody, wells were aspirated and washed 3 times. With the addition of substrate solution, wells were incubated 15-25 minutes at 37ºC. Finally, add 50 μl stop solution to the wells and read at 450nm immediately. The binding activity of of RNASEP and NPM was in a dose dependent manner.

There are currently no references for Rat RPP40 protein, His tag (active) (GTX00344-pro). Be the first to share your publications with this product.
Submit a Reference

There are currently no reviews for Rat RPP40 protein, His tag (active) (GTX00344-pro). Be the first to share your experience with this product.
Submit a Review