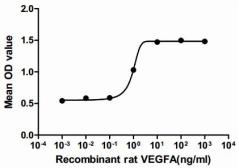 Vascular endothelial growth factor A (VEGF-A), a glycosylated mitogen, is known to be a vascular permeability factor and an endothelial cell growth factor secreted by the smooth muscle and endothelial cells. It has been reported that VEGF-A induces vascular permeability and growth, promotes monocyte/macrophage migration, and inhibits cell apoptosis and so on. To test the effect of VEGF-A on cell proliferation of ECV304 endothelium cell line, cells were seeded into triplicate wells of 96-well plates at a density of 2000 cells/well and allowed to attach overnight, then the medium was replaced with serum-free standard DMEM  prior to the addition of various concentrations of VEGFA. After incubated for 72h,  cells were observed by inverted microscope and cell proliferation was measured by Cell Counting Kit-8 (CCK-8). Briefly, 10 μl of CCK-8 solution was added to each well of the plate, then measure the absorbance at 450nm using a microplate reader after incubating the plate for 1-4 hours at 37ºC . Cell proliferation of ECV304 cells after incubation with VEGFA for 72h observed by inverted microscope. VEGFA significantly promoted cell proliferation of ECV304 cells. The ED₅₀ for this effect is typically 5. 58-9. 98 ng/ml.

This gene is a member of the PDGF/VEGF growth factor family. It encodes a heparin-binding protein, which exists as a disulfide-linked homodimer. This growth factor induces proliferation and migration of vascular endothelial cells, and is essential for both physiological and pathological angiogenesis. Disruption of this gene in mice resulted in abnormal embryonic blood vessel formation. This gene is upregulated in many known tumors and its expression is correlated with tumor stage and progression. Alternatively spliced transcript variants encoding different isoforms have been found for this gene. There is also evidence for alternative translation initiation from upstream non-AUG (CUG) codons resulting in additional isoforms. A recent study showed that a C-terminally extended isoform is produced by use of an alternative in-frame translation termination codon via a stop codon readthrough mechanism, and that this isoform is antiangiogenic. Expression of some isoforms derived from the AUG start codon is regulated by a small upstream open reading frame, which is located within an internal ribosome entry site. [provided by RefSeq, Nov 2015]
Show More +

There are currently no references for Rat VEGFA protein, His tag (active) (GTX00343-pro). Be the first to share your publications with this product.
Submit a Reference

There are currently no reviews for Rat VEGFA protein, His tag (active) (GTX00343-pro). Be the first to share your experience with this product.
Submit a Review