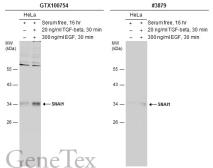 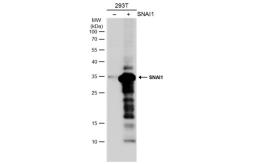 1.54 mg/ml (Please refer to the vial label for the specific concentration.)

Recombinant protein encompassing a sequence within the center region of human SNAI1. The exact sequence is proprietary.

The Drosophila embryonic protein snail is a zinc finger transcriptional repressor which downregulates the expression of ectodermal genes within the mesoderm. The nuclear protein encoded by this gene is structurally similar to the Drosophila snail protein, and is also thought to be critical for mesoderm formation in the developing embryo. At least two variants of a similar processed pseudogene have been found on chromosome 2. [provided by RefSeq]
Show More +