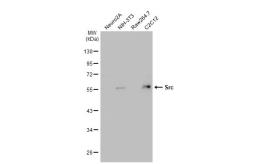 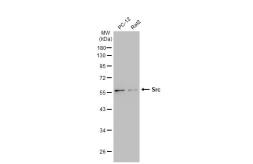 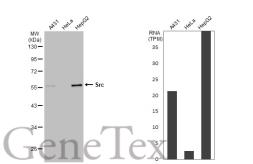 1.44 mg/ml (Please refer to the vial label for the specific concentration.)

Carrier-protein conjugated synthetic peptide encompassing a sequence within the N-terminus region of human Src. The exact sequence is proprietary.

This gene is highly similar to the v-src gene of Rous sarcoma virus. This proto-oncogene may play a role in the regulation of embryonic development and cell growth. The protein encoded by this gene is a tyrosine-protein kinase whose activity can be inhibited by phosphorylation by c-SRC kinase. Mutations in this gene could be involved in the malignant progression of colon cancer. Two transcript variants encoding the same protein have been found for this gene. [provided by RefSeq, Jul 2008]
Show More +