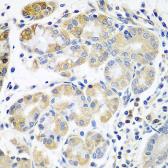 Plastins are a family of actin-binding proteins that are conserved throughout eukaryote evolution and expressed in most tissues of higher eukaryotes. In humans, two ubiquitous plastin isoforms (L and T) have been identified. Plastin 1 (otherwise known as Fimbrin) is a third distinct plastin isoform which is specifically expressed at high levels in the small intestine. The L isoform is expressed only in hemopoietic cell lineages, while the T isoform has been found in all other normal cells of solid tissues that have replicative potential (fibroblasts, endothelial cells, epithelial cells, melanocytes, etc.). The C-terminal 570 amino acids of the T-plastin and L-plastin proteins are 83% identical. It contains a potential calcium-binding site near the N terminus. Alternate splicing results in multiple transcript variants.[provided by RefSeq, Feb 2010]
Show More +

There are currently no references for T-Plastin antibody (GTX33552). Be the first to share your publications with this product.
Submit a Reference

There are currently no reviews for T-Plastin antibody (GTX33552). Be the first to share your experience with this product.
Submit a Review