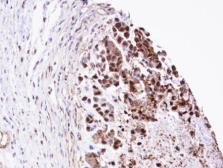 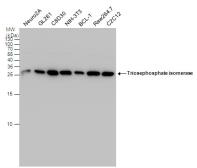 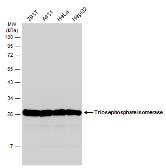 0.27 mg/ml (Please refer to the vial label for the specific concentration.)

Carrier-protein conjugated synthetic peptide encompassing a sequence within the C-terminus region of human Triosephosphate isomerase. The exact sequence is proprietary.

This gene encodes an enzyme, consisting of two identical proteins, which catalyzes the isomerization of glyceraldehydes 3-phosphate (G3P) and dihydroxy-acetone phosphate (DHAP) in glycolysis and gluconeogenesis. Mutations in this gene are associated with triosephosphate isomerase deficiency. Pseudogenes have been identified on chromosomes 1, 4, 6 and 7. Alternative splicing results in multiple transcript variants. [provided by RefSeq]
Show More +