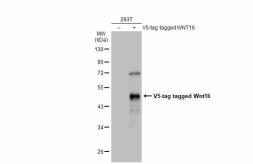 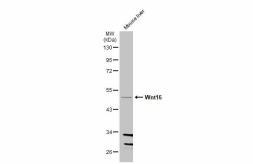 1.65 mg/ml (Please refer to the vial label for the specific concentration.)

Recombinant protein encompassing a sequence within the center region of human WNT16. The exact sequence is proprietary.

The WNT gene family consists of structurally related genes which encode secreted signaling proteins. These proteins have been implicated in oncogenesis and in several developmental processes, including regulation of cell fate and patterning during embryogenesis. This gene is a member of the WNT gene family. It contains two transcript variants diverging at the 5' termini. These two variants are proposed to be the products of separate promoters and not to be splice variants from a single promoter. They are differentially expressed in normal tissues, one of which (variant 2) is expressed at significant levels only in the pancreas, whereas another one (variant 1) is expressed more ubiquitously with highest levels in adult kidney, placenta, brain, heart, and spleen. [provided by RefSeq]
Show More + 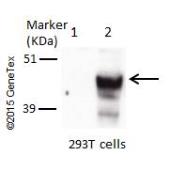