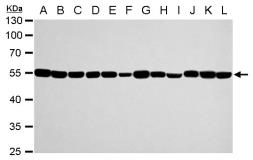 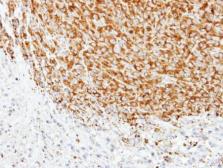 0.25 mg/ml (Please refer to the vial label for the specific concentration.)

Recombinant protein encompassing a sequence within the center region of human alpha Tubulin 1A. The exact sequence is proprietary.

Microtubules of the eukaryotic cytoskeleton perform essential and diverse functions and are composed of a heterodimer of alpha and beta tubulins. The genes encoding these microtubule constituents belong to the tubulin superfamily, which is composed of six distinct families. Genes from the alpha, beta and gamma tubulin families are found in all eukaryotes. The alpha and beta tubulins represent the major components of microtubules, while gamma tubulin plays a critical role in the nucleation of microtubule assembly. There are multiple alpha and beta tubulin genes, which are highly conserved among species. This gene encodes alpha tubulin and is highly similar to mouse and rat Tuba1 gene. Northern blotting studies have shown that the gene expression is predominantly found in morphologically differentiated neurologic cells. This gene is one of three alpha-tubulin genes in a cluster on chromosome 12q. [provided by RefSeq]
Show More + 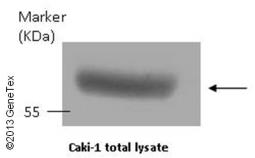 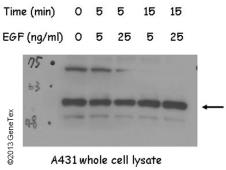