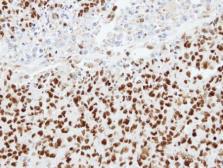 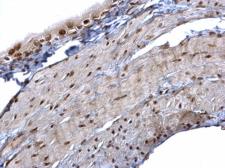 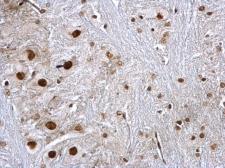 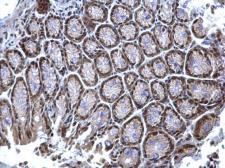 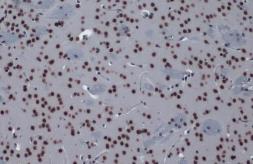 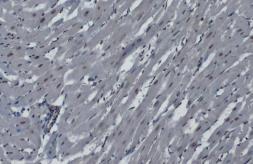 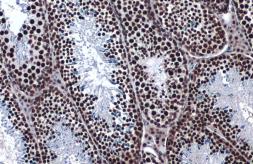 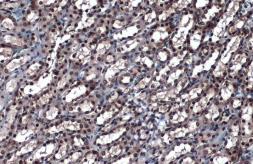 0.18 mg/ml (Please refer to the vial label for the specific concentration.)

Recombinant protein encompassing a sequence within the center region of human hnRNP K. The exact sequence is proprietary.

This gene belongs to the subfamily of ubiquitously expressed heterogeneous nuclear ribonucleoproteins (hnRNPs). The hnRNPs are RNA binding proteins and they complex with heterogeneous nuclear RNA (hnRNA). These proteins are associated with pre-mRNAs in the nucleus and appear to influence pre-mRNA processing and other aspects of mRNA metabolism and transport. While all of the hnRNPs are present in the nucleus, some seem to shuttle between the nucleus and the cytoplasm. The hnRNP proteins have distinct nucleic acid binding properties. The protein encoded by this gene is located in the nucleoplasm and has three repeats of KH domains that binds to RNAs. It is distinct among other hnRNP proteins in its binding preference; it binds tenaciously to poly(C). This protein is also thought to have a role during cell cycle progession. Several alternatively spliced transcript variants have been described for this gene, however, not all of them are fully characterized. [provided by RefSeq]
Show More +