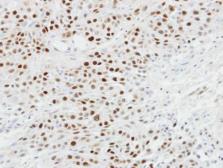 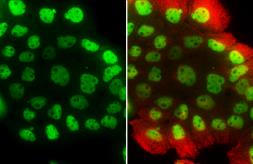 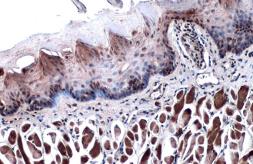 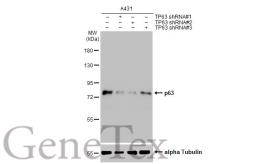 0.34 mg/ml (Please refer to the vial label for the specific concentration.)

Recombinant protein encompassing a sequence within the center region of human p63. The exact sequence is proprietary.

This gene encodes a member of the p53 family of transcription factors. An animal model, p63 -/- mice, has been useful in defining the role this protein plays in the development and maintenance of stratified epithelial tissues. p63 -/- mice have several developmental defects which include the lack of limbs and other tissues, such as teeth and mammary glands, which develop as a result of interactions between mesenchyme and epithelium. Mutations in this gene are associated with ectodermal dysplasia, and cleft lip/palate syndrome 3 (EEC3); split-hand/foot malformation 4 (SHFM4); ankyloblepharon-ectodermal defects-cleft lip/palate; ADULT syndrome (acro-dermato-ungual-lacrimal-tooth); limb-mammary syndrome; Rap-Hodgkin syndrome (RHS); and orofacial cleft 8. Both alternative splicing and the use of alternative promoters results in multiple transcript variants encoding different proteins. Many transcripts encoding different proteins have been reported but the biological validity and the full-length nature of these variants have not been determined. [provided by RefSeq]
Show More + 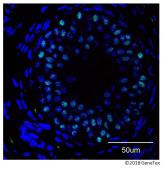