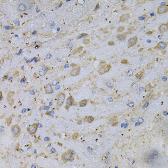 This gene encodes one of several forms of glutamic acid decarboxylase, identified as a major autoantigen in insulin-dependent diabetes. The enzyme encoded is responsible for catalyzing the production of gamma-aminobutyric acid from L-glutamic acid. A pathogenic role for this enzyme has been identified in the human pancreas since it has been identified as an autoantibody and an autoreactive T cell target in insulin-dependent diabetes. This gene may also play a role in the stiff man syndrome. Alternative splicing results in multiple transcript variants that encode the same protein. [provided by RefSeq, Oct 2008]
Show More +

There are currently no references for GAD65 antibody (GTX32615). Be the first to share your publications with this product.
Submit a Reference

There are currently no reviews for GAD65 antibody (GTX32615). Be the first to share your experience with this product.
Submit a Review