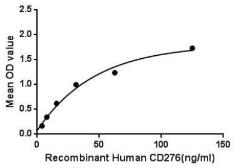 Cluster Of Differentiation 276 (CD276) also known as B7-H3 in human, is a member of the B7/CD28 superfamily of costimulatory molecules serving as an accessory modulator of T-cell response. B7 proteins are immunoglobulin (Ig) superfamily members with extracellular Ig-V-like and Ig-C-like domains and short cytoplasmic domains. Among the family members, they share about 20-40% amino acid (aa) sequence identity. CD276 may play a protective role in tumor cells by inhibiting natural-killer mediated cell lysis as well as a role of marker for detection of neuroblastoma cells. It has also been found to enhance the induction of primary cytotoxic T lymphocytes and stimulate IFN-gamma production. Besides, Sialic acid-binding Ig-like lectin 12 (SIGLEC12) has been identified as an interactor of CD276, thus a binding ELISA assay was conducted to detect the interaction of recombinant human CD276 and recombinant human SIGLEC12. Briefly, CD276 were diluted serially in PBS, with 0.01% BSA (pH 7.4). Duplicate samples of 100 μl were then transferred to SIGLEC12-coated microtiter wells and incubated for 2h at 37ºC. Wells were washed with PBST and incubated for 1h with anti-CD276 pAb, then aspirated and washed 3 times. After incubation with HRP labelled secondary antibody, wells were aspirated and washed 3 times. With the addition of substrate solution, wells were incubated 15-25 minutes at 37ºC. Finally, add 50 μl stop solution to the wells and read at 450nm immediately. The binding activity of CD276 and SIGLEC12 was in a dose dependent manner.

The protein encoded by this gene belongs to the immunoglobulin superfamily, and thought to participate in the regulation of T-cell-mediated immune response. Studies show that while the transcript of this gene is ubiquitously expressed in normal tissues and solid tumors, the protein is preferentially expressed only in tumor tissues. Additionally, it was observed that the 3' UTR of this transcript contains a target site for miR29 microRNA, and there is an inverse correlation between the expression of this protein and miR29 levels, suggesting regulation of expression of this gene product by miR29. Alternatively spliced transcript variants encoding different isoforms have been found for this gene. [provided by RefSeq, Sep 2011]
Show More +

There are currently no references for Human CD276 protein, His tag (active) (GTX00156-pro). Be the first to share your publications with this product.
Submit a Reference

There are currently no reviews for Human CD276 protein, His tag (active) (GTX00156-pro). Be the first to share your experience with this product.
Submit a Review
Newsletter