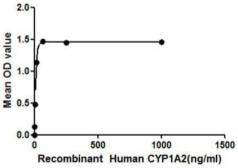 CYP1A2 (Cytochrome P450 1A2) belongs to the group of proteins which contains heme as a cofactor. CYP1A2 oxidizes a variety of structurally unrelated compounds, including steroids, fatty acids, and xenobiotics. Besides, ASAH1 (Acid ceramidase) has been identified as an interactor of CYP1A2 through affinity capture-MS. Thus a binding ELISA assay was conducted to detect the interaction of recombinant human CYP1A2 and recombinant human ASAH1. Briefly, CYP1A2 were diluted serially in PBS, with 0.01% BSA (pH 7.4). Duplicate samples of 100 μl were then transferred to ASAH1-coated microtiter wells and incubated for 2h at 37ºC. Wells were washed with PBST and incubated for 1h with anti-CYP1A2 mAb, then aspirated and washed 3 times. After incubation with HRP labelled secondary antibody, wells were aspirated and washed 3 times. With the addition of substrate solution, wells were incubated 15-25 minutes at 37ºC. Finally, add 50 μl stop solution to the wells and read at 450nm immediately. The binding activity of CYP1A2 and ASAH1 was in a dose dependent manner.

This gene encodes a member of the cytochrome P450 superfamily of enzymes. The cytochrome P450 proteins are monooxygenases which catalyze many reactions involved in drug metabolism and synthesis of cholesterol, steroids and other lipids. The protein encoded by this gene localizes to the endoplasmic reticulum and its expression is induced by some polycyclic aromatic hydrocarbons (PAHs), some of which are found in cigarette smoke. The enzyme's endogenous substrate is unknown; however, it is able to metabolize some PAHs to carcinogenic intermediates. Other xenobiotic substrates for this enzyme include caffeine, aflatoxin B1, and acetaminophen. The transcript from this gene contains four Alu sequences flanked by direct repeats in the 3' untranslated region. [provided by RefSeq, Jul 2008]
Show More +

There are currently no references for Human CYP1A2 protein (active) (GTX00158-pro). Be the first to share your publications with this product.
Submit a Reference

There are currently no reviews for Human CYP1A2 protein (active) (GTX00158-pro). Be the first to share your experience with this product.
Submit a Review
Promotion