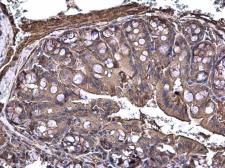 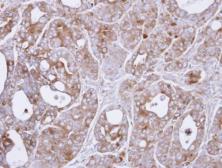 Recombinant protein encompassing a sequence within the center region of human MAP3K8. The exact sequence is proprietary.

This gene was identified by its oncogenic transforming activity in cells. The encoded protein is a member of the serine/threonine protein kinase family. This kinase can activate both the MAP kinase and JNK kinase pathways. This kinase was shown to activate IkappaB kinases, and thus induce the nuclear production of NF-kappaB. This kinase was also found to promote the production of TNF-alpha and IL-2 during T lymphocyte activation. Studies of a similar gene in rat suggested the direct involvement of this kinase in the proteolysis of NF-kappaB1,p105 (NFKB1). This gene may also utilize a downstream in-frame translation start codon, and thus produce an isoform containing a shorter N-terminus. The shorter isoform has been shown to display weaker transforming activity. [provided by RefSeq]
Show More +