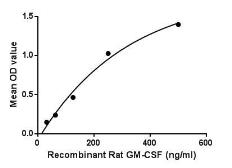 Granulocyte-macrophage colony-stimulating factor (GM-CSF), also known as colony stimulating factor 2 (CSF2), is a monomeric glycoprotein secreted by macrophages, T cells, mast cells, natural killer cells, endothelial cells and fibroblasts that functions as a cytokine. GM-CSF stimulates stem cells to produce granulocytes (neutrophils, eosinophils, and basophils) and monocytes. It also has some effects on mature cells of the immune system. These include, for example, inhibiting neutrophil migration and causing an alteration of the receptors expressed on the cells surface. GM-CSF signals via signal transducer and activator of transcription, STAT5. In macrophages, it has also been shown to signal via STAT3. Besides, Colony Stimulating Factor 2 Receptor Alpha (CSF2Ra) has been identified as an interactor of GM-CSF, thus a binding ELISA assay was conducted to detect the interaction of recombinant rat GM-CSF and recombinant rat CSF2Ra. Briefly, GM-CSF were diluted serially in PBS, with 0.01% BSA (pH 7.4). Duplicate samples of 100 μl were then transferred to CSF2Ra-coated microtiter wells and incubated for 2h at 37ºC. Wells were washed with PBST and incubated for 1h with anti-GM-CSF pAb, then aspirated and washed 3 times. After incubation with HRP labelled secondary antibody, wells were aspirated and washed 3 times. With the addition of substrate solution, wells were incubated 15-25 minutes at 37ºC. Finally, add 50 μl stop solution to the wells and read at 450nm immediately. The binding activity of GM-CSF and CSF2Ra was in a dose dependent manner.

There are currently no references for Rat GM-CSF protein (active) (GTX00365-pro). Be the first to share your publications with this product.
Submit a Reference

There are currently no reviews for Rat GM-CSF protein (active) (GTX00365-pro). Be the first to share your experience with this product.
Submit a Review
Newsletter