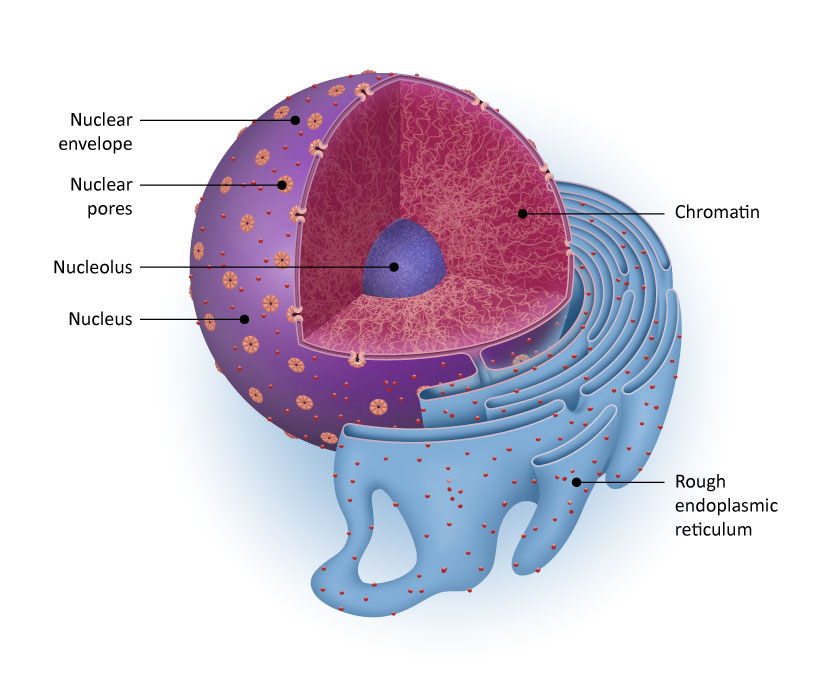 The nucleus constitutes approximately 10% of the eukaryotic cell volume. It is enclosed within the double-layered nuclear membrane (or envelope), with communication between the nucleus and the cytoplasm mediated through nuclear pores. The nucleus contains the cell’s DNA genome combined with histones and other proteins to form chromatin. Condensation of this chromatin into chromosomes occurs during mitosis, which is preceded by DNA replication. Transcription of the genome is subject to tight regulation by both genetic and epigenetic mechanisms that essentially determine the phenotypic identity of the cell.

The fine structure of the nucleus includes several features. The most evident is the nucleolus, an organelle without a membrane whose most prominent role is assembly of ribosomes. The inner membrane of the nuclear envelope associates with the nuclear lamina, a fibrillar meshwork that impacts chromatin structure and organization and therefore influences gene expression. Heterochromatin, which is architecturally compact and largely inactive transcriptionally, is usually arranged adjacent to the nuclear membrane. Conversely, euchromatin is distributed throughout the nucleus and has a more “open” structure, consistent with it being the location of transcriptionally active genes. The nucleus is commonly found to be situated near the rough endoplasmic reticulum, with which it has some continuity through the perinuclear space between the inner and outer layers of the nuclear membrane.