Melanoma is the deadliest form of skin cancer that develops from melanocytes, a pigment-producing cell. The incidence of melanoma has doubled over the last three decades in the United States (1). With treatment, the five-year survival rate is more than 90% for cases contained at the primary site, and less than 30% once there is metastasis. Early detection is therefore crucial to prevent local invasion and distant spread.

S100B, a member of the S100 family of calcium-binding cytosolic proteins, is an independent prognostic marker for melanoma (2-4). Elevated S100B and lactate dehydrogenase (LDH) levels are clinically useful for the detection of tumor progression and metastasis (5). GeneTex’s S100 beta antibody (GTX129573) is a well-cited antibody validated for western blot, immunohistochemistry, and immunostaining in various species, including human, mouse, and rat (Figure 1).

LDHA facilitates glycolytic flux by converting pyruvate to lactate and NADH to NAD+. It is primarily cytoplasmic, but is also found in mitochondria and the nucleus. In addition to its metabolic function, LDHA is also a single‐stranded DNA‐binding protein participating in DNA duplication and transcription. Elevated expression of LDHA is observed in various cancers. In melanoma, LDHA regulates mitochondrial ROS accumulation, tropomyosin oxidation, and cytoskeletal remodeling to control tumor metastasis. Blockade of LDHA resulted in improved efficacy of PD-1/PD-L1-related immunotherapy (6). GeneTex’s LDHA antibody (GTX101416) is a well-cited polyclonal antibody validated for multiple applications and species (Figure 2).

Melan A, also known as MART1, is a melanocyte lineage-specific marker. The mouse monoclonal antibody [A103] was raised against recombinant Melan A and is positive in most primary melanomas as well as being a useful tool to detect metastatic disease [7]. Melanoma-associated Antigen is recognized by the mouse monoclonal antibody [HMB-45], which is positive in 90-100% of primary melanomas (Figure 3).

Figure 3. GeneTex’s Melan A antibody [A103] (GTX34832) detects MelanA protein by immunohistochemistry in human melanoma tissue (left), while the Melanoma-associated Antigen antibody [HMB-45] (GTX71957) is another valuable marker for both primary and metastatic melanomas (right). 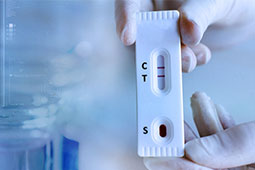 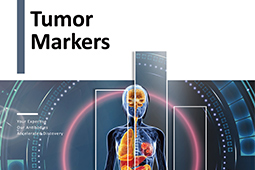 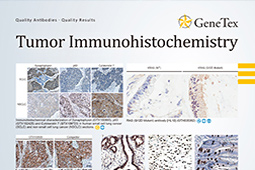